On the Drawing board: McDonald's Illustrations

Two weeks ago I was in Chicago for an illustration & animation conference, which also allowed visits to family. It was relaxing, nice to catch up with my Mom and my brother & his family. Simply put, lots of fun.

A few days in, I was looking forward to what I thought would be seven more days off from deadlines. More time off! Yippee...

Then I received a call requesting 14 cartoon illustrations for a presentation to executives at McDonald's headquarters July 24, to start immediately.

I considered turning it down, but after a few hours of internal battling, I realized I should not. (I decided that I should quiet my 'inner child on summer vacation' and tell him to get to work.)

The presentation announces and illustrates a new method for promotions to be delivered to stores: Instructions and images for digital signs will be delivered to restaurant managers' smart phones. Laser cut signs are tailored to the specific architecture and window size of each location.

(By the way, I never tire of hearing corporate executives get excited over innovations that in some cases might sound like wheat crop reports to anyone else...they can be downright giddy! But hey, it means they love their jobs.)

The first task was to create a character representing a typical McDonald's store manager. A few were drawn, but having been through a few corporation character creations before, I had a feeling the blonde male or female characters would not used, and instead a dark haired character would be the winner, since it could represent multi-cultural managers. Indeed it was chosen.

B&W sketches of the concepts were created while still in Chicago (using my Wacom Intuos drawing tablet and Macbook Pro), revisions made, and then approved...the digital watercolor for the finished art was done on the Wacom Cintiq, after arriving home in Boulder. 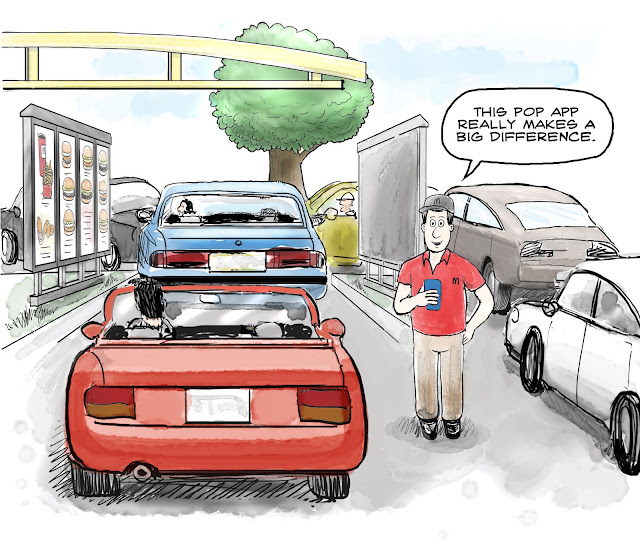 I'd share more of the illustrations, but I don't want to bore anyone. (There was no opportunity to write humor, so these were straight drawings.) Fun and relatively easy to create, but not as much fun for folks who are not McDonald's management to see. 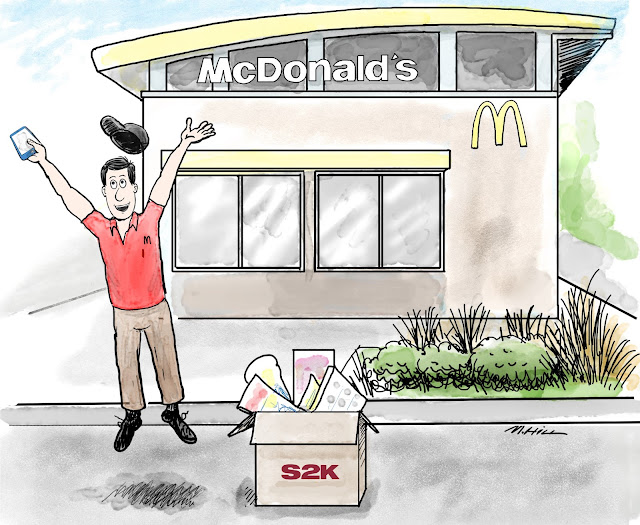 The final artwork for all 14 illustrations was delivered Friday, the presentation is being made in Chicago today. To celebrate, I am taking my my inner child swimming at the neighborhood pool later and if he's good, he might also get a popsicle.