Stopping by for a breather, (through the requisite face diaper, of course)

I hope you and your loved ones are staying well in this science fiction movie-like existence.

Like nearly everyone, I am mostly sticking to one GPS location, (and not chasing the siren songs of the deep snow at A-Basin, as usual this time of year). Being busy drawing and writing prevents most rumination about the no-skiing rules in effect. 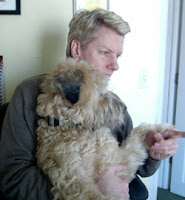 I'm taking breaks by doing things like teaching the dog to point. We're also, shaking hands/paws, as I am out of practice. By the way, the dog is the happiest of anyone in our family...he is thrilled that no one leaves the house for long. So, our relationship is definitely on an upward swing.

Another benefit: All of us can say that our cooking skills have improved, (well, except for the dog.)

The impact of the global pandemic is considerable in its reach. Kids are no longer in school and sadly, many people have lost jobs or have been furloughed. (Let's hope that is short-lived). Many more are working differently, staying put and utilizing video meetings and apps. 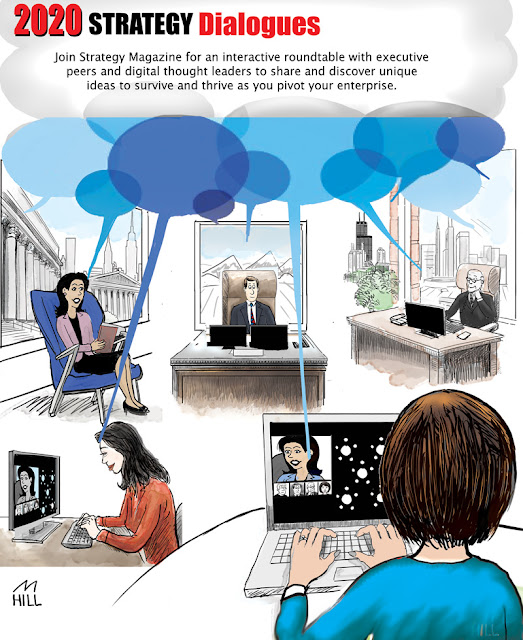 So far, I am fortunate to have plenty of work with books and corporate clients, and for now, I'm taking on more projects than usual because I don't know what lies ahead. Most of the people I know in my profession are staying busy. I hope the same is true for you.

Over the past few years, I've become well accustomed to working from home. I leased offices for over a decade, but changed that several years ago, since I rarely physically meet with clients (who are usually in other time zones).

Instead of continually renewing leases, we put an addition on the house, and I have been walking twenty feet to the studio instead of eight blocks, ever since. I miss the social aspects sometimes - and certainly more so now, as friends are not dropping by, and I can't visit them, either. But other things are not missed, like the rent for that first office space on the Pearl Street Mall - which has since increased to being more than our mortgage payment. 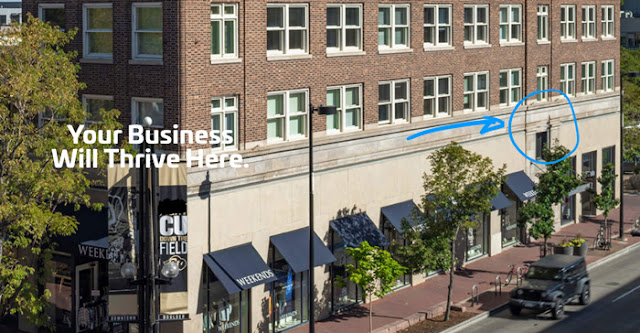 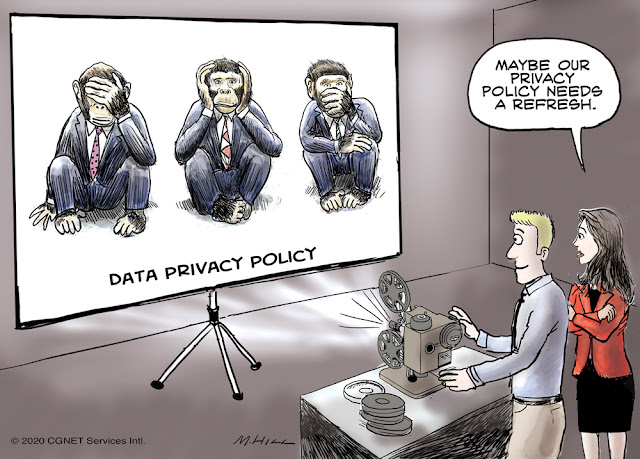 I need to get back to some deadlines, and I don't want to make you snooze, (you can nap anytime these days, right?) so I'll wrap up soon. So before signing off, I thought I'd share some of a current project in the studio.

I was recently hired to illustrate and write humor for a new book by noted author, Gary Hamel. Gary  is the originator (with C.K. Prahalad) of the concept of core competencies. He is also a visiting professor at both Harvard and the London Business School. 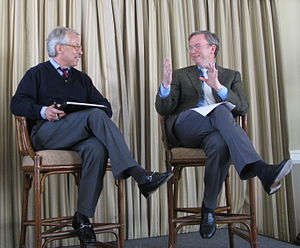 His new book is Humanocracy, written with co-author Michele Zanini, and will be released in August by the Harvard Business Review Press. It has been fun collaborating with him and I'll share a few early samples of illustrations: 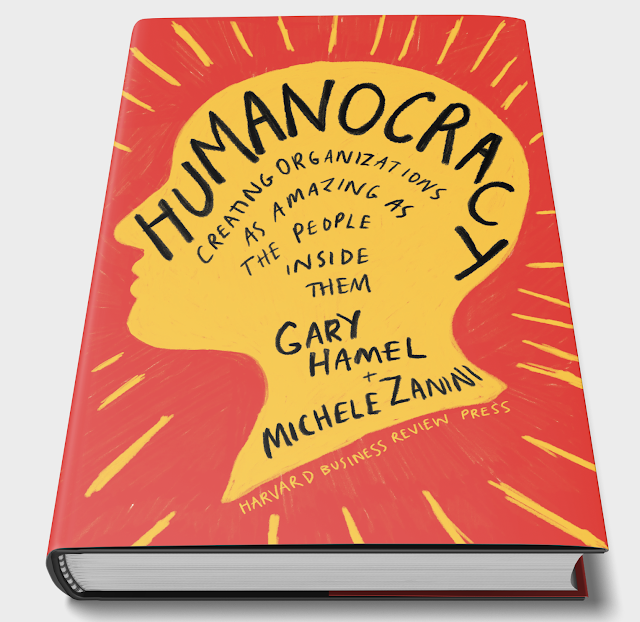 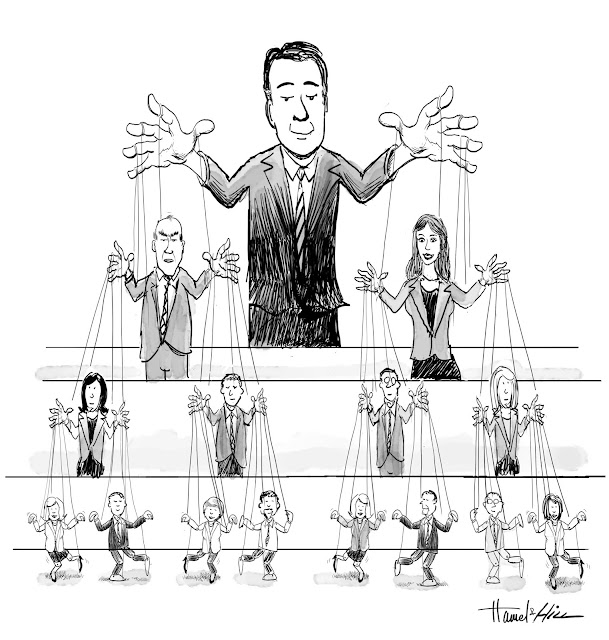 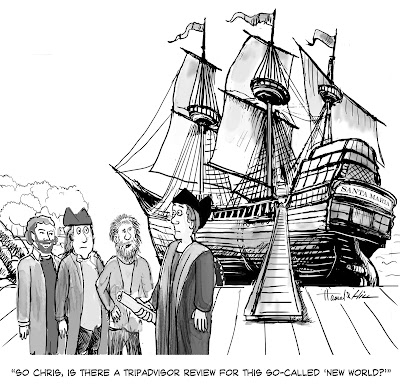 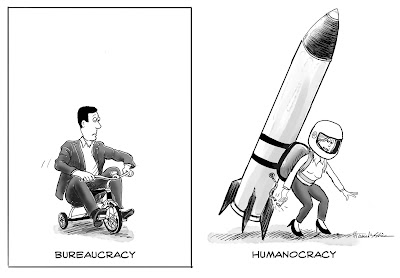 I have created roughly 20 illustrations so far, and I'm doing them all in high resolution, as some of them will also be used by the author in presentations on a book promotion tour.

When time allows, I'll share a story about Gary's unique interview and "tryout" hiring process, as well as some other client work, including two other book illustration projects that will be starting soon.

Meanwhile, stay home, and try to keep your sense of humor...though it's not easy to do both long term.

Edit: A break in deadlines allowed this to be added on 5/12

A story about author Gary Hamel's hiring process: After an email inquiry, Gary asked me to do a phone interview, and he revealed that he had set up interviews with twenty cartoonists nationally. (That must have taken him some time, as my call alone lasted over an hour.) The chat was enjoyable and fortunately, I made the next cut.

Five of us were invited to participate in a paid humor writing and drawing "try-out". I don't usually agree to that sort of thing, but for certain projects it is worth the effort, and I liked the author, so I agreed.

Gary told me that the other four finalists were "New Yorker" magazine cartoonists. (Yikes). Tough competition, as those guys can draw and write top notch humor...so I have to admit I was a little uncertain about my chances when I heard it.

We each wrote and drew two sample cartoons to fit a chosen theme in the book. After the try-out ended, I was hired, along with one other cartoonist, and the two of us were tasked with creating roughly 50 cartoons. (Yay).

The initial group of cartoons and illustrations is nearing completion, and it has been a great deal of fun.

Next up: I just signed contracts to illustrate a few books; one is about families handling the Covid situation, going back to school, work, etc. It will feature whimsical children's fiction style illustrations. The author is someone with whom I worked previously, on a book published by Pelican Books. That starts in June, and I'm looking forward to it.
Posted by Mark Hill 4 comments: