Added motivation to keep in shape

I know several people who are walking and biking more than usual these days. (It's hard imagine such an increase in a community like Boulder, Colorado where every street has a bike lane and the average citizen often bikes or walks to stores and restaurants anyway.)

But sure enough, gas prices have changed behavior, even here. People are trading in their Ford "Excavations" and Toyota "Land Bruisers", as I like to call them, for smaller cars. As for smaller cars, the media and Hollywood types have been trumpeting the value of Toyota Priuses, (or is it Prii, like a Latin plural?), and Honda Hybrids.

[BTW, as a quick aside, hybrids are great for the environment and helping to decrease overall oil consumption...but they don't help individuals or families save money. Studies by Car & Driver and Consumer Reports have proven that one would need to drive a hybrid over 100,000 miles before breaking even on the added cost (over a similar size traditional car.) Because of their tiny tires, they also don't handle as well on dry or wet pavement as a regular car.]

The overall change in behavior is a wonderful thing to see. As people drive different vehicles or drive less and exercise more, we are becoming more like Europeans, who are used to high fuel costs...folks who generally weigh less and live longer than we Americans.
Posted by Mark Hill 3 comments: 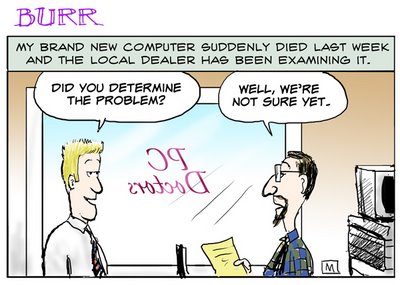 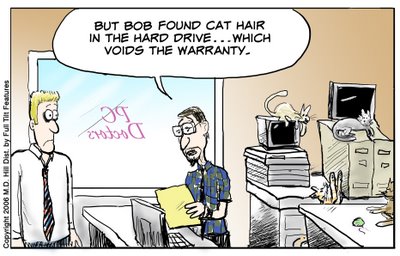 As we all know, customer service seems to be suffering. Store clerks are quite often rude or just plain ignorant about the products and services they are employed to help customers with.

Something like the situation in the above cartoon happened to me a while back. It was beyond the simple lack of help one often encounters these days; it became a situation where the store employee actually added to my problems.

I took our camcorder in to the local camera dealer, (who is reputable and normally has top-notch service.) However this time, the service department technician was on vacation and the 'new guy' handled my repair. The original battery was not working and a brand new battery didn't work, either. (The camcorder worked when the power cord was plugged in.) I often repair simple electronic items myself, but I thought I'd defer to the experts on this.

I received a call a week later from "Clyde", saying that he had looked and looked, but couldn't find the problem. He even tried putting various amounts of voltage across all the terminals and nothing happened. (This didn't sound good to me, but I figured he must know what he's doing.)

So, I picked up the camcorder, took it home and looked at it myself -- just for the heck of it. Surprisingly, I found a loose terminal, soldered it...and it the camera turned on! But to my disappointment, the speakers and the LCD screen no longer functioned. I discovered that the speaker and LCD connection wires had been melted...most likely by a power spike. (The phrase "various amounts of voltage" came back to me.)

I called Clyde and asked him if he had noticed the speakers and LCD not working...and he said yes, but he also noticed the camcorder was smoking after he ran his "tests"...and that I must have a defective unit. "By the way", he offered, "we have a sale on new camcorders."

Fortunately, after replacing the wires (without Clyde's assistance), everything works fine now.

Romance (Beware the Ides of March) 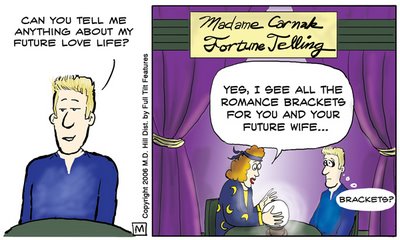 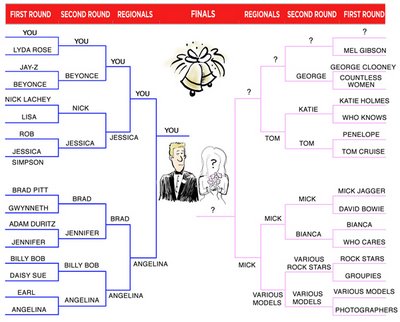 The subject of dating and relationships has always fascinated me. It can require all of one's wit, creativity, patience and intelligence to navigate relationships, (especially over a lifetime with a significant other). It's a subject that we must master to find happiness in life...yet it's the one in which we receive the least amount of training. It's not covered in school -- and call me crazy -- but I think it should be.

As for today's cartoon: I'm a big college basketball fan...and it occurred to me that finding "the one" is not unlike March Madness.
Posted by Mark Hill 2 comments: 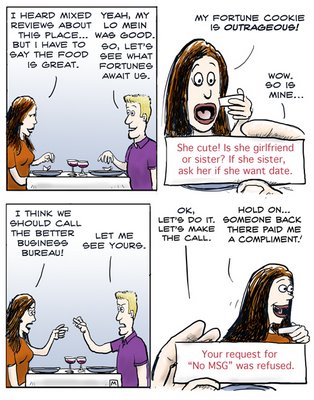