It's nearing the end of the Holiday Season, and I don't know about you, but it seems like I've had little extra time - for a while. So, I have been absent here. But now that we have an entirely New Year to play with, our slates are clean! (Kidding.) New commitments and adventures await, for all of us.

For the first time in years we did not send out a custom family Christmas card. I was swamped with client projects, my wife and daughter equally busy with work and school...and just as we were catching our breath, unfortunately, our family dog passed away. I drew a card, but didn't have the heart, or the time to print it and mail it.

First, some photos from a family Christmas trip to visit my Mom in Illinois.. 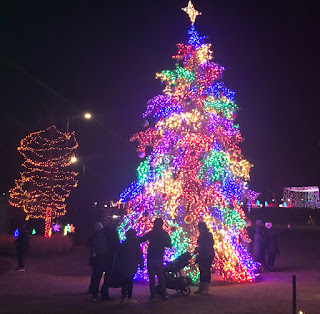 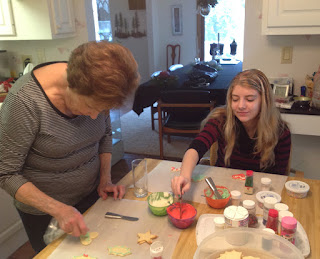 First, from the drawing board last month are two New Yorker cartoons. 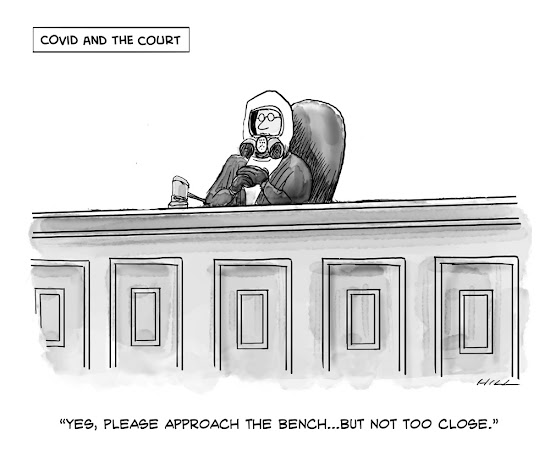 This idea germinated after speaking with a client who is a Federal judge regarding the evolution of the legal system during the pandemic. (Find this cartoon here: https://bit.ly/3nnrtdP ) 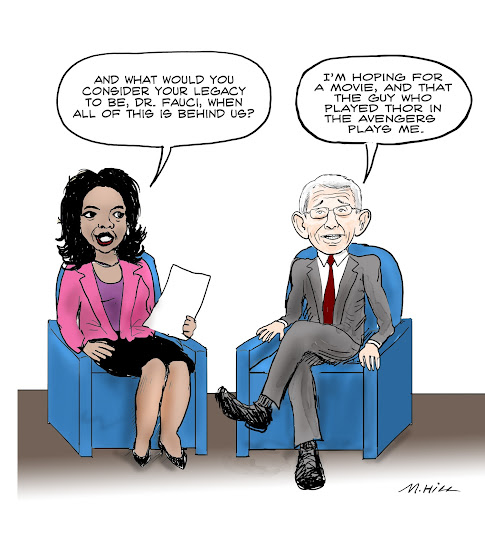 The next project goes back to November. Most of my clients are out of state, and this was a rare local gig - a fun one at that. I was commissioned to write and draw five political cartoons to fight a well-funded initiative pushed by a group of real estate investment firms located outside Colorado.

Here are two of the five pieces...all were published in the Boulder Camera newspaper, and a in series of website pages, posters, mail pieces, etc. 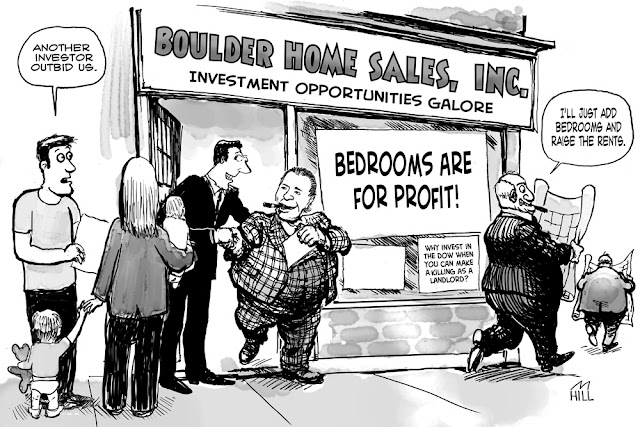 From the Denver Post: "The proposed ordinance is so poorly written that it would unintentionally rezone all residential neighborhoods in Boulder. It destroys occupancy limits. It doesn't include a provision to ensure affordability, and it failed to include a clause to prevent rental housing investors from subdividing rooms or scraping houses and replacing them with de facto dorms. It happened in Austin and could happen here." 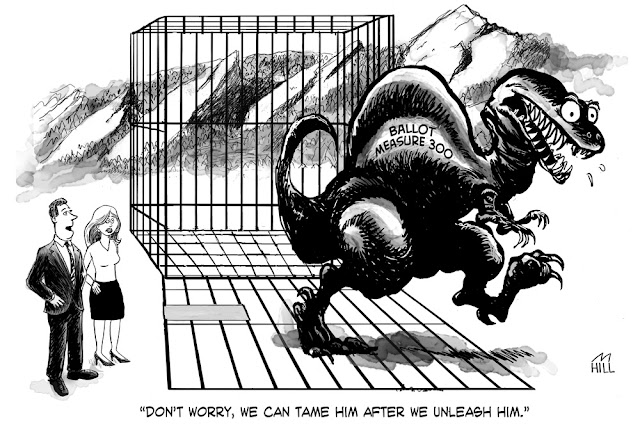 After starting off well behind in the polling, the opposition group who hired me pulled off an upset in the election, and defeated the well-funded real estate consortium, (They filed an appeal with the Colorado Supreme Court, and failed there as well.) Afterwards, I got a chance to talk with some city council members about their relief, and received some nice feedback from the Boulder mayor. It reminded me that the most rewarding and enjoyable work can sometimes be in your own back yard.
----------
This was created for a retiring CEO at Heidrick and Struggles, the world's leading executive search and placement firm. I worked with some folks in their their Houston office in writing ad drawing scenes for the gentleman depicted .he final art was printed on 18" X 24" 55 lb stock, then matted and framed. It was presented to him at his retirement party. 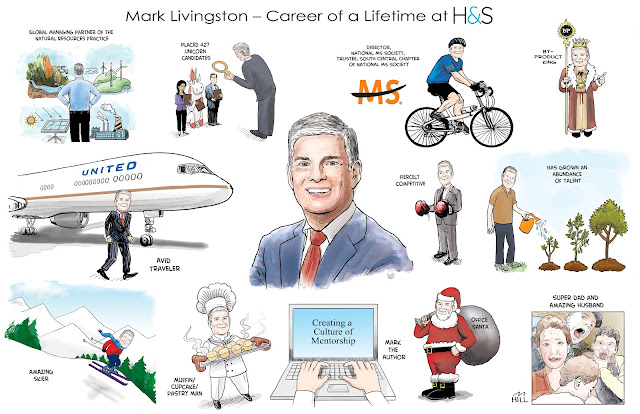 I just wrapped up a similar project for an executive at Golin Public Relations. Golin is a Fortune 500 company with 50 offices around the globe, (and I was admittedly unfamiliar with them.) Their HQ is in Chicago, where they occupy the 26th floor of the John Hancock Tower, one of my favorite buildings in the world.

The illustrations are a gift, commissioned to honor a career milestone for Fred Cook, the Chair Emeritus of Golin. I discussed the five scenes with two of Golin's management, via Microsoft Teams. Then I created sketches, and after approval, finished pen and ink drawings with watercolor washes. Everything was matted and framed in a horizontal layout of five scenes. 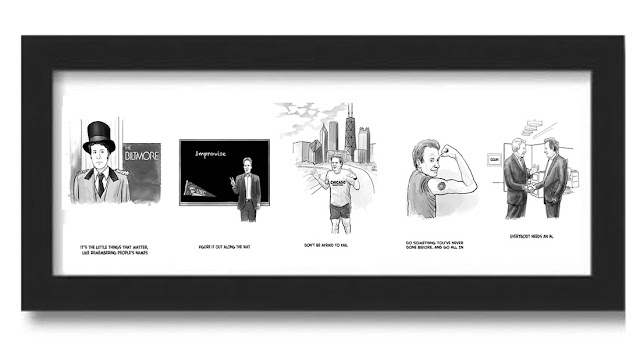 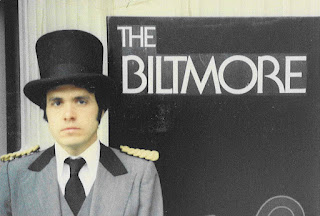 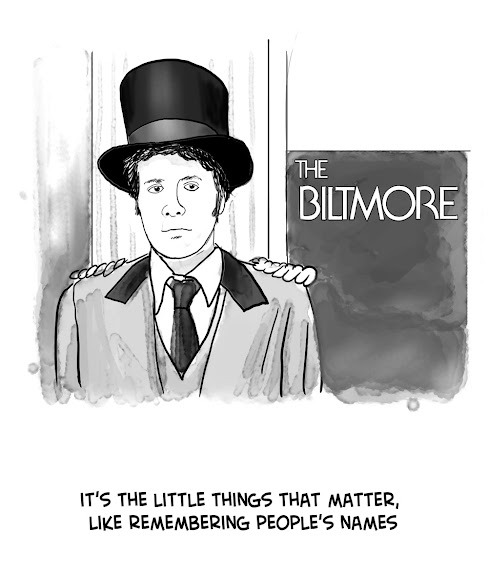 The Hancock building was one of my favorite places to go as a kid while living
near the windy city, (so I was pleased to get a chance to draw it for this project... 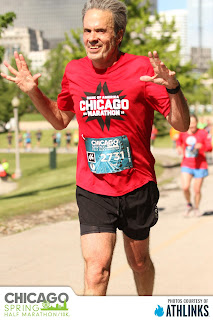 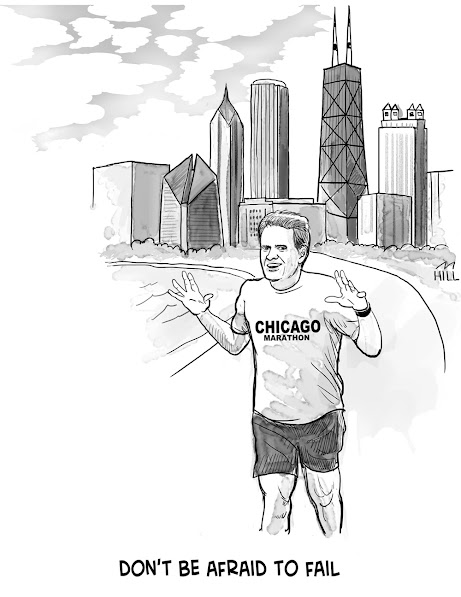 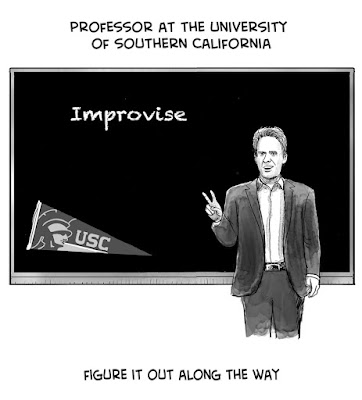 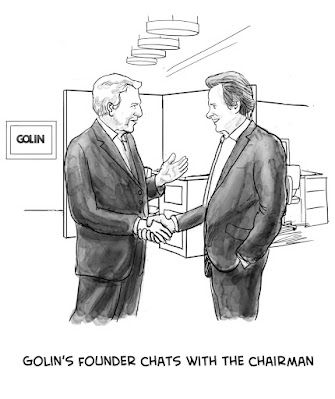 ----------------
Lastly, an illustrated logo for a humorous podcast hosted by a gentleman in Connecticut. His sensibilities and humor were a cross between Larry David and Jerry Seinfeld. Working with him was a great deal of fun. I can't wait to listen to his podcast. 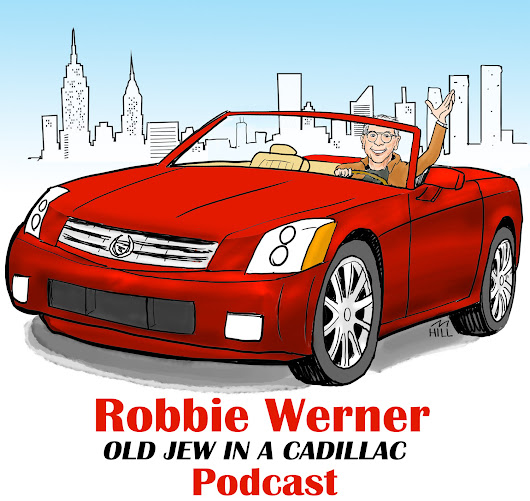