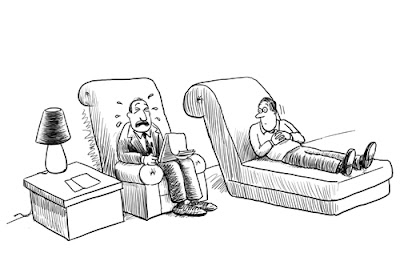 A corporate client in California commissioned me to do a series of cartoons for their company website and a 'caption contest' for their customer base. I love working on things like that because there are no parameters for subject matter or scenarios. I get to just open the creative valve and see what comes out...

This particular cartoon came to mind this morning as an old friend called and vented about a relationship. I tried my best to listen and offer advice...but after a while I felt like I needed to vent, too.

So, Phhhhhhhhhhhhhhhhaaaaaaaaaa!!! (I feel much better now. Thanks for listening.)

Have a hankering for a hunk of Brie cheese? 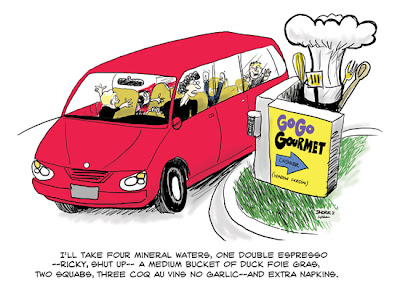 The above title hearkens back to the old SchoolHouse Rock animated shorts on Saturday morning tv. ("Conjunction Junction", etc.) But as it nears lunch time here, I'm wishing I had a way to get a quick gourmet meal, with no big time investment and not much expense.

Here's a cartoon, (done for client & friend, Brad Shorr), that shows just such a place. I can almost see somebody franchising a place like that. (It would go well until the first customer sued because they gagged on a diamond pin in their lobster-artichoke panini.)
Posted by Mark Hill 2 comments: 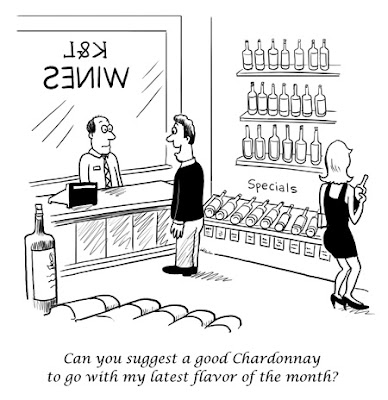 This is a cartoon I created for K&L winery (California) last month.

Their ad agency was doing a campaign that showed an open copy of a New Yorker-like magazine with a "New Yorker" style cartoon...and obviously, they could not simply publish a photo of the actual magazine without violating copyrights. Additionally, they wanted the cartoon to be specifically about wine and mention their winery in the background.

So, they hired a San Francisco design firm to create the magazine layout and they hired me to write and draw the "New Yorker" cartoon. I wrote three concepts and we all agreed that this one fit, so I drew it, and the SF designer placed it into the design. Lots of fun, and I enjoyed getting to see the ad in a few magazines this month.

Two book illustration jobs are on the drawing board, and I'm going to do my best to get ahead with them so that I can take a motorcycle trip into the mountains, now that the snow is clear from most of the roads at high altitude. I'm going with a friend who is in town for a few days.

Here's an old pic from a motorcycle trip taken with that friend, and another buddy. We rode from Boulder to Kansas City to see a White Sox/Royals game...and to Lawrence Kansas, (where my girlfriend at the time was pursuing graduate degrees in Education at KU). That was 15 years ago...wow. 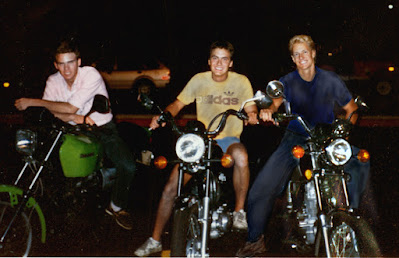 Ahem. Well, please accept my apologies for the set-up -- and then the big drop-off. It has been a crazy few months with business, (which is terrific)...and also over the past several months, we endured a family illness and loss, (my wife's mom was diagnosed with colon cancer and recently passed away)...which hit us very hard.

After settling back into a semblance of normal routine, I now see that the idea of maintaining both personal and business blogs is too much to even dream about. Thus, I will just maintain this blog formerly called "Toon Town" and now renamed "Dancing Moose", encompassing all cartooning subject matter, personal and professional.

Hope all is well on your end.