This is apparently the year of reunions with old chums and buddies. Last week, I received a phone call from a friend I hadn't seen in years, (since the Pre-Cambrian Era, when I lived in Illinois). His name is Brian Kelly, and he's a talented cartoonist I got to know at the school newspaper of the University of Illinois.

(Warning: steps into memory lane) ... Brian and I hit it off immediately when we met at the school paper. In addition to being a top-notch cartoonist, he's a very likable guy. But we also have nearly identical passions for cartoons, and similar abilities in talking about them to the point where other folks of lesser wind would drop to the floor. (We even took a trip together to the Chicago Tribune Tower once, to meet with Pulitzer prize-winning cartoonist, Dick Locher...arranged through a cartoonist friend of Brian's.)

Brian and his lovely wife Wendy were in Denver over the weekend, looking at homes while considering a move to Colorado. They were gracious enough to call and suggest a meeting for dinner. I immediately agreed and well...it was great, to say the least. Brian and I had a terrific time discussing the state of cartooning in almost every genre. (I feel sorry for his wife, who politely listened and offered thoughts when she was given a small opening in our wall of words. I did learn about their family, her job and highly-respected abilities in marketing...but I still feel like she must have felt left out at times.) (Next time, I'll be sure to bring my wife along.)

Brian told me they haven't yet decided on whether to relocate, but if they do, I suspect we'll find a way to fill some free time, (and some mugs at the local microbrewery.)
Posted by Mark Hill 3 comments: 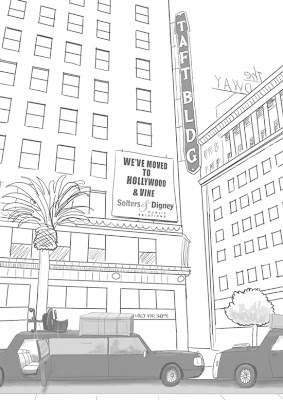 This was a job for an agent/PR firm in Hollywood that I received through a reference from a client, (a magazine publisher).

The PR firm needed a piece of art for postcards and PR industry print ads, announcing their move to new offices. (To the swank corner of Hollywood & Vine.) The corner is supposedly famous in Hollywood, (don't ask me...I have little concept of such things. I don't even know why Paris Hilton is famous.)

Anyway, the main theme we settled upon was to show some of their office furniture tied to the top of a limo. And the street and surrounding buildings became a central part of making it 'recognizable', so I needed to draw them into the moving scene. The only way to do it was to turn the card 90 degrees from the typical 'landscape' layout.

It was a lot of fun to do some multi-point perspective drawing. (Not much call for that in most of the cartoons I do.) The client was happy with it -- and hopefully they are also enjoying their new digs, too. 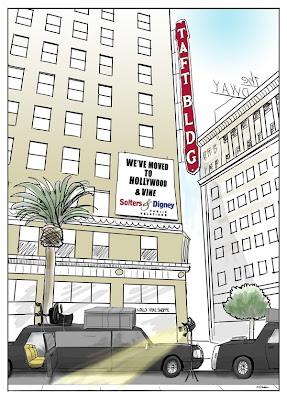 Email ThisBlogThis!Share to TwitterShare to FacebookShare to Pinterest
Labels: illustration, On the Drawing Board 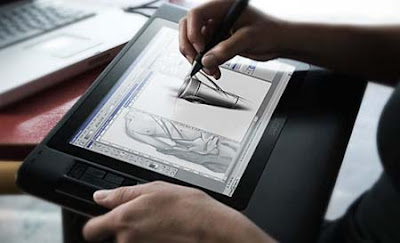 Wacom just introduced two new Cintiq tablets, and the most interesting model is a portable. All I can say is, wow, it looks terrific! (In addition to my wife, it appears to be something to drool over.) I'll have to add it to my new technology list for next year's tax write-offs.

I currently use an Intuous 3 every day with my desktop Mac. I also use it with my MacBook at night on occasion, just sitting on the couch next to my daughter. (If I have tight deadlines, being at home with the family is better than working long hours alone.) I also then bring the Intuos and MB along with me when traveling to take care of clients while away. It works very well, but it takes some initial adjustment to draw with your hand on a tablet in front of you, while looking up at a screen several inches away.

This sort of a tablet would allow for more direct hand-eye coordination, and given its relatively tidy size, I imagine it work well in and out of the studio. $1000 seems a bit steep for such a small unit…but then again, it’s about half the cost of the full-size model. It's sure to sell — and like the Intuos, it has no real competitors in the market.