The caller was a gentleman from Boston who is an executive with a prominent business magazine. He told me that his wife is a ballet dancer by profession and she had read my blog. He further explained that he and his (at-that-time) fiance liked my 'Dancing Moose' illustration very much, and wondered if I'd mind if she had a tattoo created based upon the logo/illustration. He assured me it would be placed in an area where only she and he would see it. (The mind runs quickly to images of where that might be...but I didn't ask.)

He asked how much I would charge for the use, and I told him I was simply flattered to know that he and his wife enjoyed my moose enough to have it reproduced in such a unique manner.
I sent him a larger, high resolution file for the tattoo artist to use for reference. (Below). 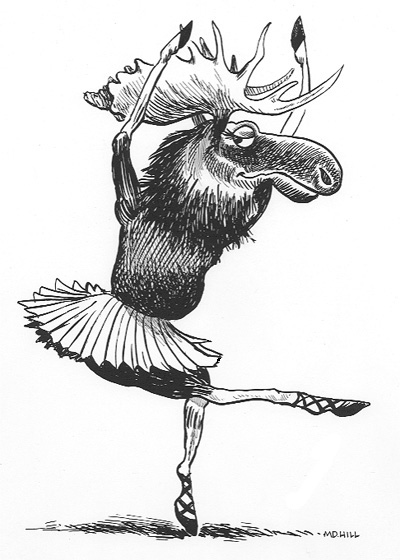 Well, flash-forward a few weeks to after their recent honeymoon: She went ahead with it. I later received a photo of the 6-inch tattoo...and here it is, 'in the flesh'. It looks like the tatto artist did a good job recreating it, and made an adjustment with the left "arm". And I get it...that was tough to draw behind the antlers while making also it clear it was not part of the antlers.

To the caller and his wife, (who, at his request, will remain anonymous here): Thanks for taking the time to contact me and let me share in the fun. 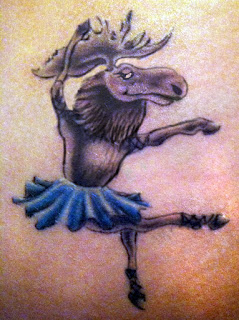