On the Drawing board - Process: From ideas to finished artwork

I thought I'd add a quick post covering creative process and craft, since what you usually see here, (and from anyone in my profession), is finished work.

Here's a quick synopsis of the creation of a series of illustrations I just wrapped up today, for Brainstorm Creative in Los Angeles...

I was hired to assist with creating a presentation for one of their clients, on a very short, 48-hour turn around. Having that amount of time to go from concept and written ideas to sketches, comps and finished color art is not ideal...but sometimes having a quick deadline can be a fun challenge, (and a test of one's ability to ignore the siren songs of bike riding weather.)

The client is a tech firm specializing in mobile Internet security. One of the principals is giving a presentation Monday covering how most companies grapple with these issues, and he wanted to illustrate some key topics.

In my discussion with the head of Brainstorm Creative, the original request was two illustrations, the first of which would show a CEO and CSO, (Chief Security Officer),  dealing with their perspectives on this.

It was a lot going on visually, frankly, and more than a viewer would likely decipher quickly.

So, I suggested that we separate the scenarios illustrating the mobile security threats first, and then adding the characters' reactions in a separate image, with a faded background of the first image.

So here are my initial sketches... 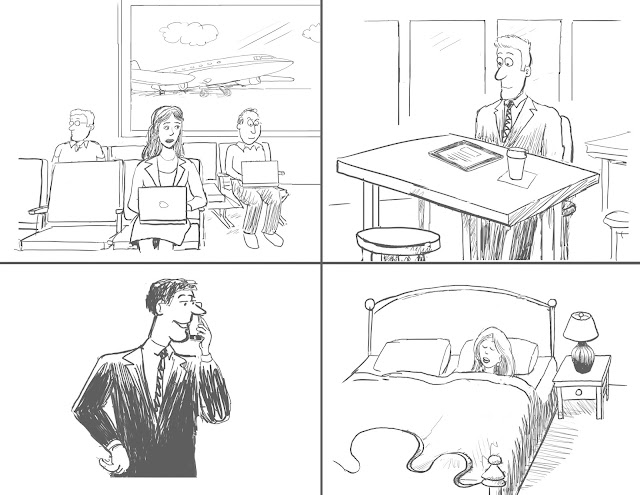 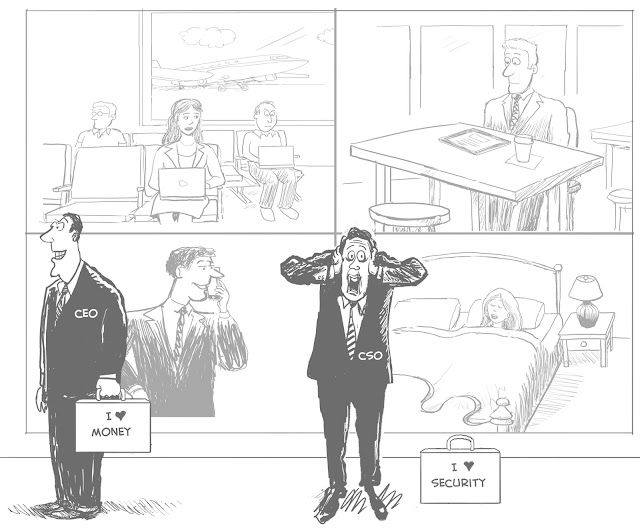 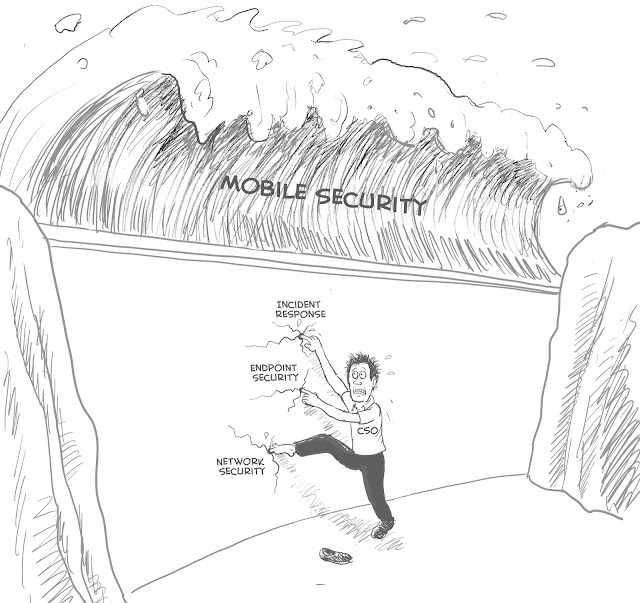 The client requested a few revisions, mainly addressing how we want to show threats in the first illustration. We added a hacker in a coffee shop in the upper right, and removed a hacker from the airport scene, since computer threats can be an issue from a distance.

The next stage was black-and-white ink: 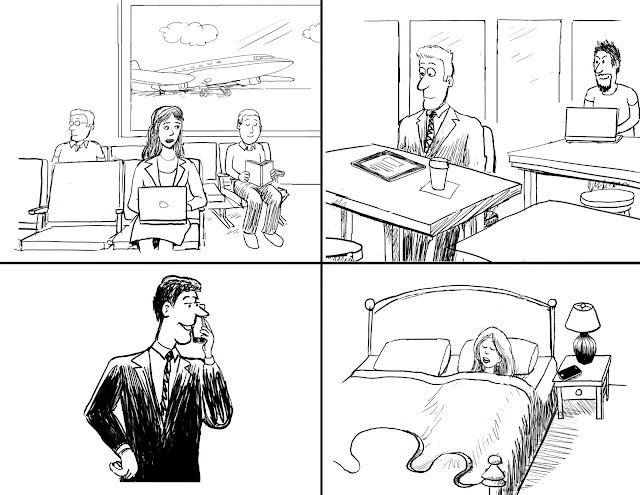 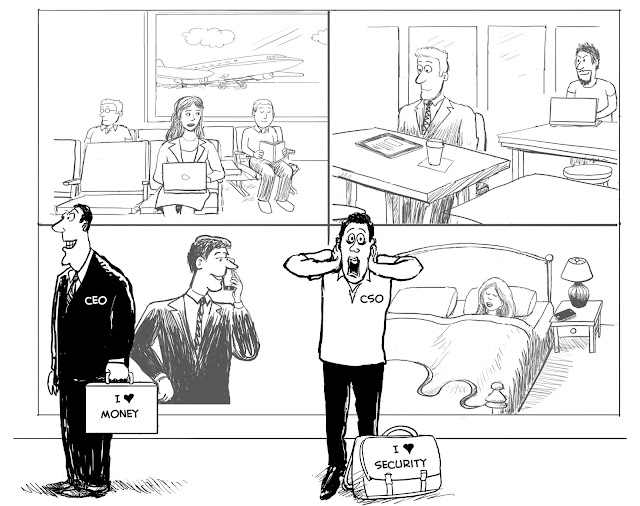 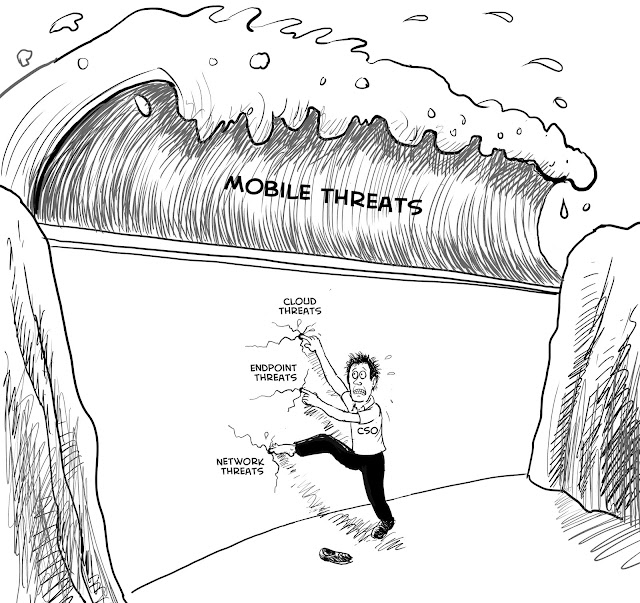 Brainstorm's client really liked the look of the B&W ink art and only wanted to change the labels on the holes in the dam in the third image, calling them "threats" rather than "security" - helpful for clarity.

I suggested to watercolor for these, to lend a feel that would be a little bit softer and more organic. 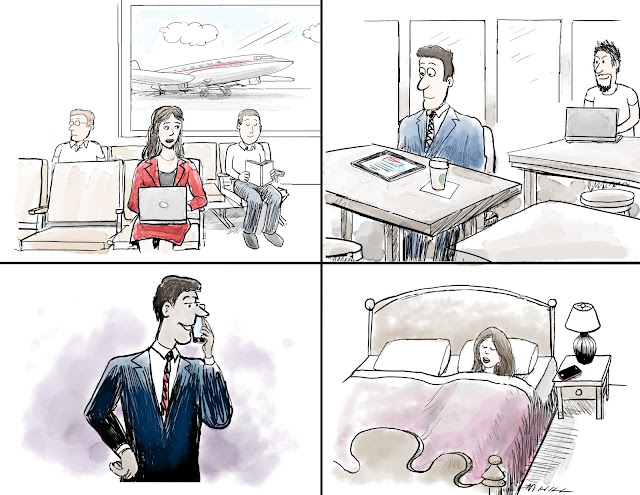 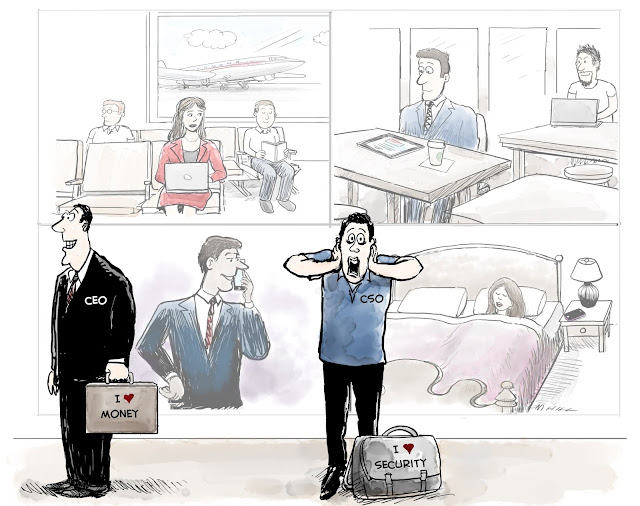 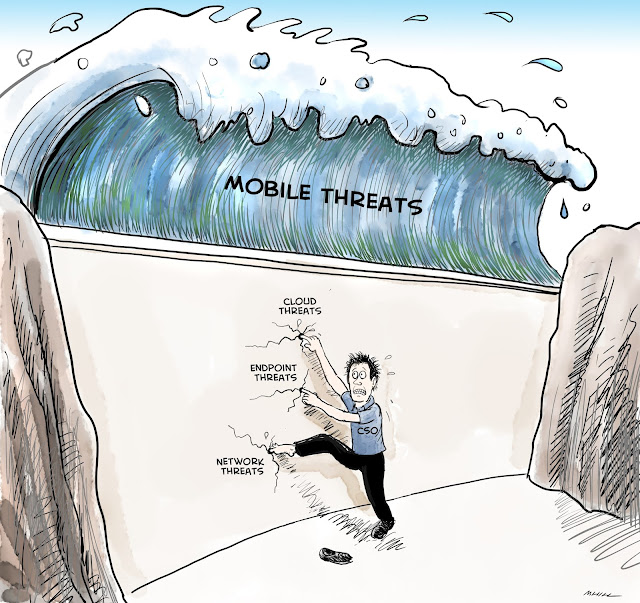 While doing the final watercolor this morning, I was interrupted by a call from our daughter, who is returning home from a 10-day school trip to Italy...and despite being on a tight deadline, I did not want to miss that. (We found out that she caught a cold but had a great last day, and was set for her class flight to NY.)

Back to work, and a half hour later, I delivered the final files, (ten minutes before the buzzer). Not much time left for changes, but fortunately, they were not needed. Later I was told that their client was happy. Phew! I walked the dog after that to clear the little bit of adrenaline lingering.

Next up on the drawing board, hopefully at a slower pace: I just negotiated the commission to illustrate a book for the long-running 'Dummies' books series, (It will be: "Enterprise Agility for Dummies", dealing with the company wide introduction of change at the corporate level. Not something I would personally read, mind you.) I also signed a contract to illustrate a business book soon to be published by Random House. A few advertising illustration gigs to play with will round out the next month or so.