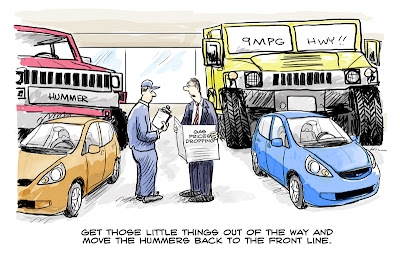 Another cartoon created for a magazine that goes to automobile dealers throughout the U.S. The subject matter is based upon a report on sales numbers from this week. They showed that as gas prices eased a bit, consumers responded immediately by eschewing small cars for big SUV's again. (How short-sighted are these folks? Are they the same ones who go out and eat two Big Macs and super sized fries after they lose 8 ounces in their diets? ) Unfortunately, the attached cartoon is more an illustration of reality than a satire. 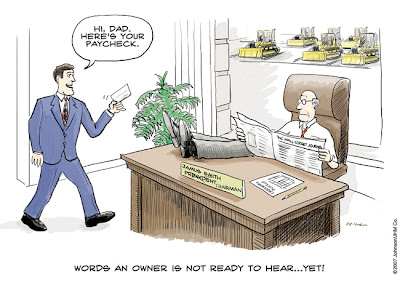 This is another advertising illustration created for the insurance & retirement fund firm back east.

As depicted in this scene, business owners typically don't like taking a back seat to their offspring at the companies they founded. They often end up being pushed to the sidelines by their eager heirs, maintaining an office for appearances and title, only...which is a tough transition for a person who had the drive to get the whole enterprise started.
Posted by Mark Hill