On the Digital Drawing board wrap-up: Google, Pixar, Spanx, Elections and Books

Over the past few months I’ve had trouble finding time to post here. It remains that way. Seven corporate projects and three book illustration jobs currently reside on the drawing board, and I recently turned down a few new projects, due to being overbooked. Good to be busy, yes, but perhaps a bit too much. Thanksgiving weekend is providing a nice break and time with my family. I have a few minutes while everyone is asleep, to stop in and write a little.
I will waste no time in briefly sharing a few recent things…
We'll start things off with two samples from of a large number of political cartoons created the recent election. These cover the Liz Cheney - Harriet Hageman race, Hageman won, (and the final election was all but decided long before November.) 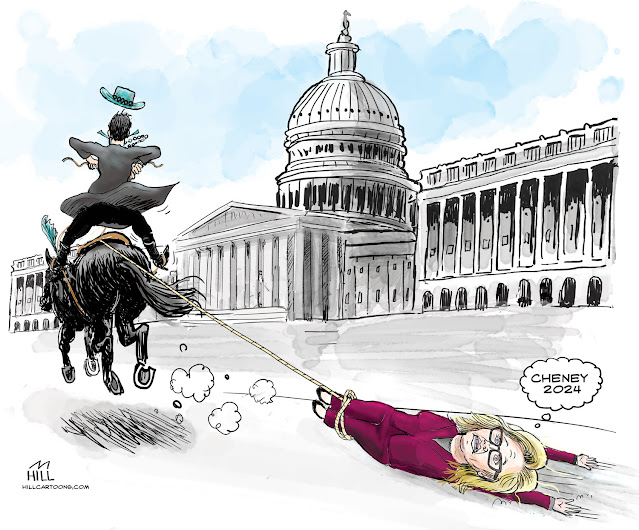 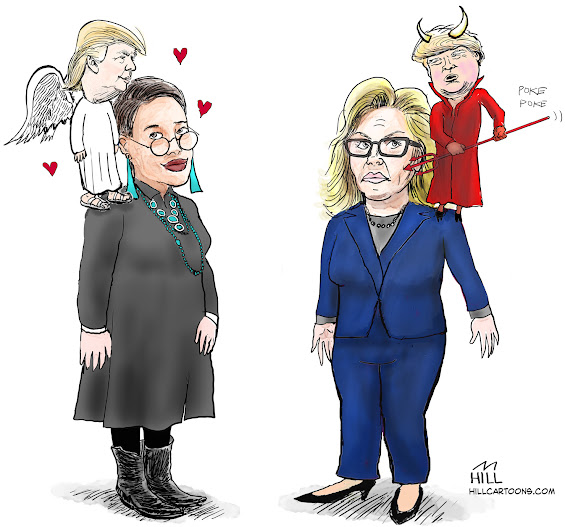 I was contacted by an editor in Philadelphia to do a series of political cartoons for her magazine, beginning with cartoons covering this race. And on that note, I think it's amazing how a political race (for the only seat) in Wyoming became a national news story. Additionally, celebrities (like Kevin Costner) have been spotted wearing a t-shirts supporting each of the candidates.

A side note: after drawing the two women, I can say that they are both very interesting looking people.

————-
An illustration of Roseanne Cash performing at Carnegie hall. One of over a dozen illustrations currently in process for a book about prioritization. The author just sent it to the publisher for final editing. 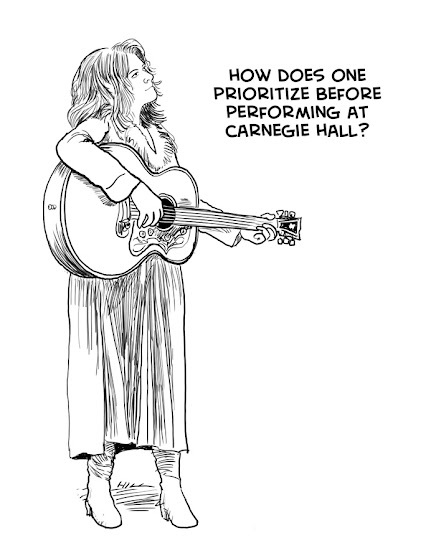 ------------------------
A personal commission for the editor of a publication on the East coast with whom I have worked. Her son is a college student a Bowdoin in Maine, and she wanted to give him a framed illustration as a gift when he arrives home for winter break. I had some fun with this, adding some thematic elements that reflected her son's interests. I created two versions, one vertical and the second horizontal. allowing my client and her husband to choose which worked best aesthetically and for framing. 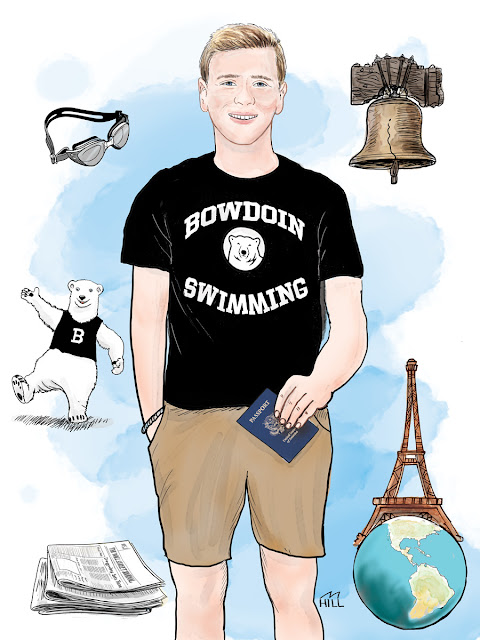 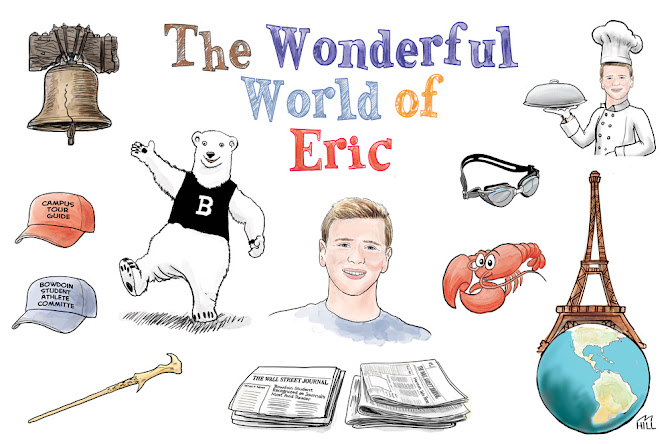 ------------
I'm in the early stages of illustrating a children's book called "The Moon and the Mantis".
Here are some initial design illustrations for one of the main characters... 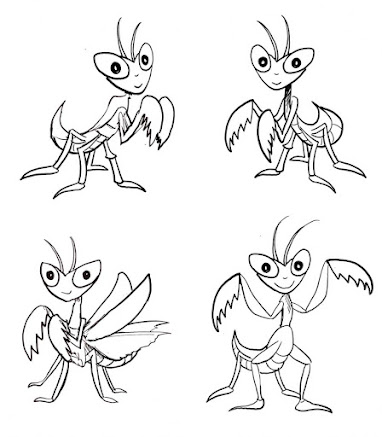 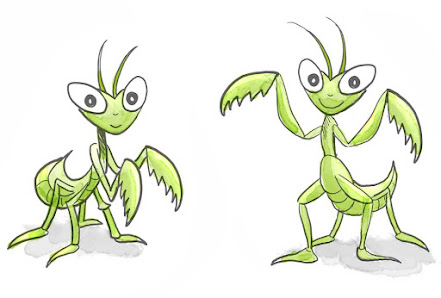 One of several cartoons created for Pathway Academy in London. 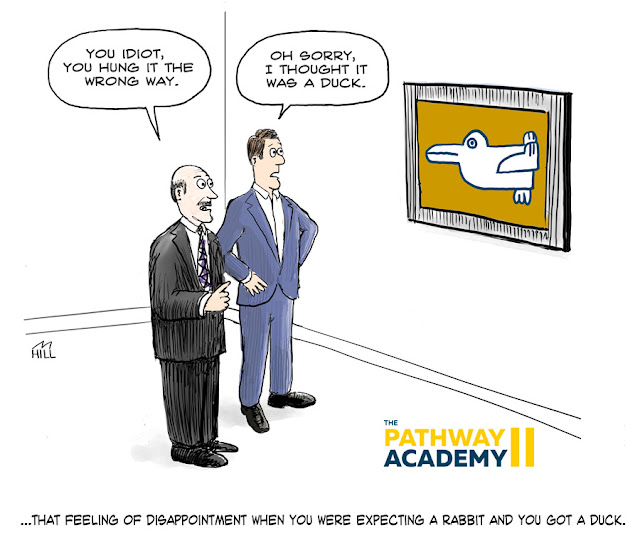 -----------------
A cartoon illustration commissioned by a Citi Group Financial
executive for a presentation to investment bakers. 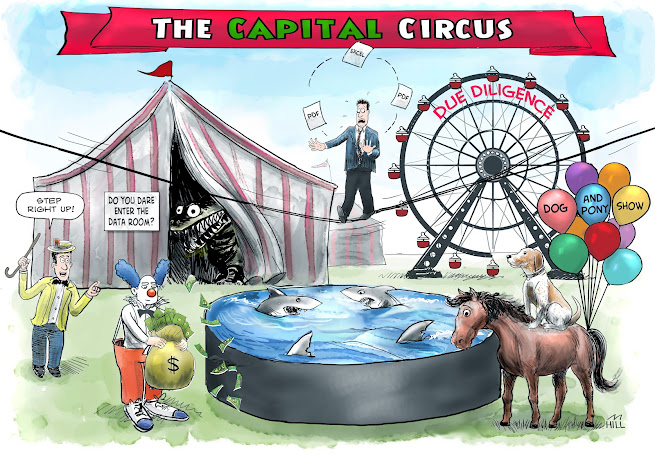 -----------------
One of several scenes of background artwork I helped to create for an animated short film.
(I am not involved with the animated sequences.) The film will be finished in Spring 2023.
(Clicken to enlargen) 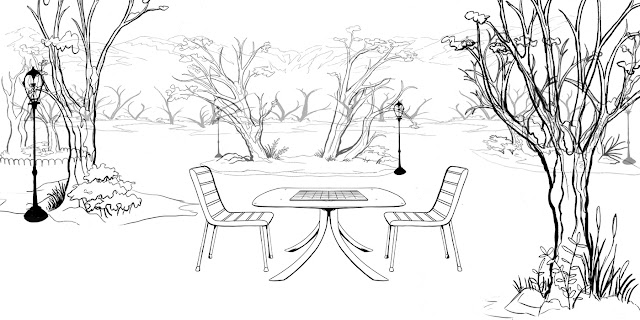 -----------
Another ongoing project is for a new physician-led start-up in North Carolina that helps doctors to hone and refine their business practices. Let's be honest, most physicians have spent years in medical school, then  residency, and are simply constantly busy, with precious few hours left over to learn business strategies and skills. Insurance, Medicare, and Obamacare have also driven them into smaller incomes and fights for payments. I am working with a physician-organization designed to teach doctors how to regain financial control of their practices. The first order of business was to create a character that will appear in a series of courses and videos.
-----------------------------

I was recently hired by Google to create a series of cartoons for their advertising. They first contacted me a couple of years ago to create some humor for meetings with executives of large client companies. The goal this time is to compare the benefits of their cloud storage to that of AWS (Amazon) and Microsoft. To be candid, data storage is fairly boring subject matter...and they want humor to season it, like herbs added to a an otherwise good-looking but bland quiche or soufflé . (Now I have a hankering for a hunk of Gruyère cheese.)
So, I'm starting by having some fun with the writing. (And Google's plentiful budget allows for lots of playing.) I'm in the midst of initial concepts and rough sketches, and will share some finished things soon.
---------------
A cartoon commissioned for an Invitational golf tournament at the spectacular Big Horn Golf Club in Palm Desert California in late December. I was asked to emulate the style of the late, great cartoonist, Randy Glasbergen. (I drew in his style for the character,  and added my watercolor and background,) 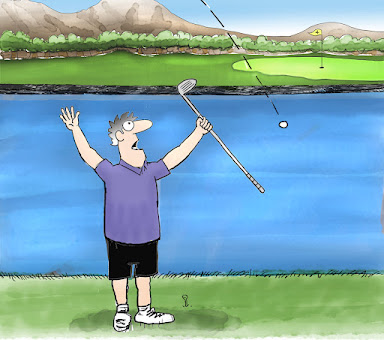 Another fun project currently on the board is a new book illustration project for an author who is a former Apple and DreamWorks executive. He has an agent and publisher in hand and he has been working with an editor. He’ll remain nameless right now…but I’ll just say that he contacted me a few months back to help him by writing humor and then illustrating his concepts in a way that hopefully helps to keep the reader engaged. I can't divulge what it's about or share images, as it is under non-disclosure wraps for now, via his agent and publisher. Suffice it to say that after reading it, this seems like a book that will appeal to a good number of readers, particularly in the corporate world.
----------
Next up: a personal commission depicting Sara Blakely (Spanx clothing founder) and her husband, Jesse Itzler, (owner of the Atlanta Hawks NBA team) I was asked to create it by a long-time client who is a friend of theirs, and this will presented to them as gift at their home. The scene is an inside joke about online dating, and the language and misspellings used in meeting each other. I don’t fully get that joke, but I have been assured that they will….which is what matters. Meanwhile, it has been fun to draw them in a relatively simple style, (less detailed than I do for most personal commissions and caricature illustrations.) 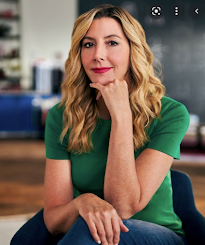 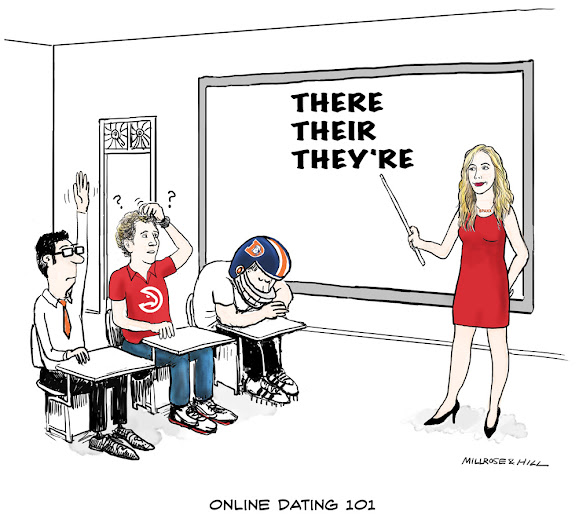 —————-
I'm in the midst of creating some pen and ink illustrations for Burpee Seeds/Ball Horticultural in Chicago. The illustrations depict various plants sold in Home Depot.
I created for a comic book style illustration for one of their print ads in 'Better Homes and Gardens' magazine two years ago: 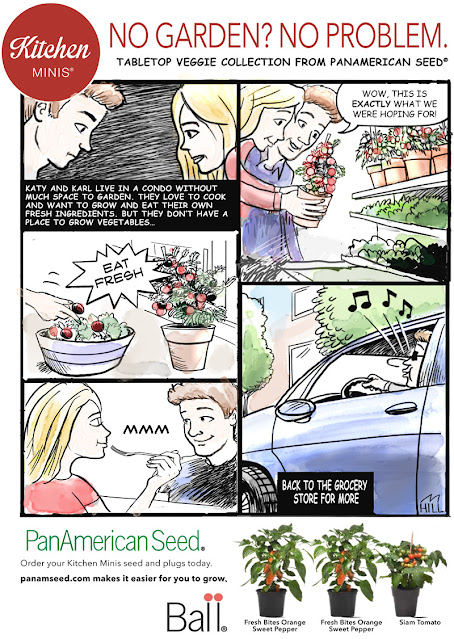 This time I'm using a pen and ink with watercolor style, which is quite a bit more detailed. My music is on, and I'm jamming while drawing pots, leaves, tomatoes and soil.
The art will be part of instructional material sent to all Home Depot stores in March. First draft below: 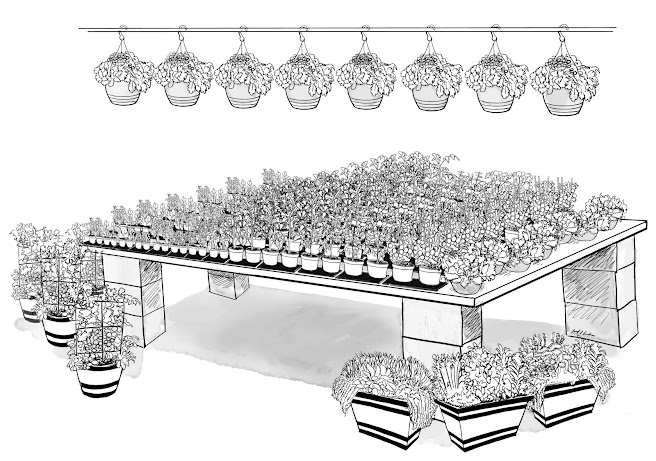 (Clicken to embiggen)
------------
Here’s something currently on the drawing board for a law firm in NYC with whom I’ve worked for several years. This is a Holiday greeting card that will be mailed to their friends and clients and also posted online as part of a charitable donation drive for the homeless. In this case, the concept and dialogue was written by some of the partners in the firm...I served as the illustrator. (Gray scale first draft was just approved, and I added color..will send it off later today.) 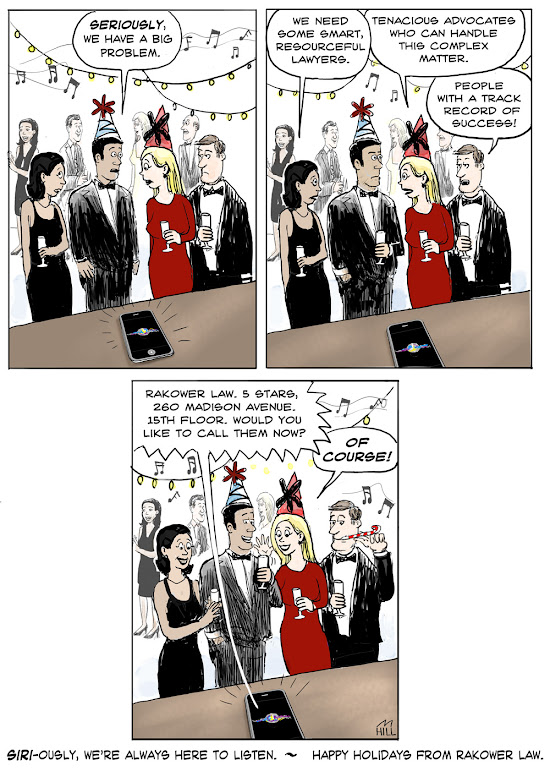 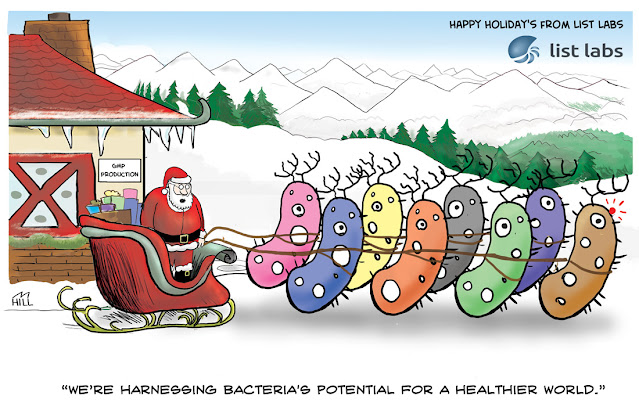 Lastly, we’re enjoying a visit from our daughter during college fall break.
Happy Thanksgiving - hope your celebration and family time was as nice as ours.
Posted by Mark Hill 2 comments: