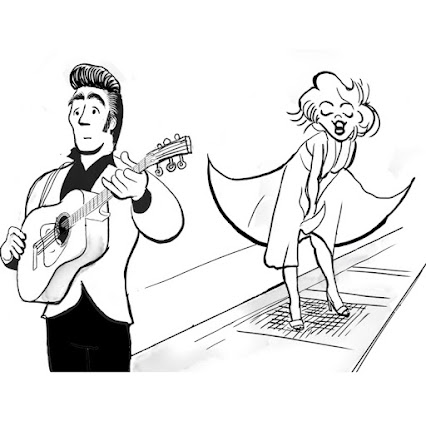 The first "step-by-step" process post got some good responses, so I thought I'd try another.

This one is involves both writing and drawing, for an ongoing gig for Ralph Lauren Polo Inc., that started a few months ago.

RL's Director of advertising and social media contacted me in June, wanting to discuss doing a series of humorous illustrations, focusing on their Polo-inspired restaurants. (I was aware of the restaurant in New York City, but learned there are also "Polo" establishments in Paris, London and Chicago.) 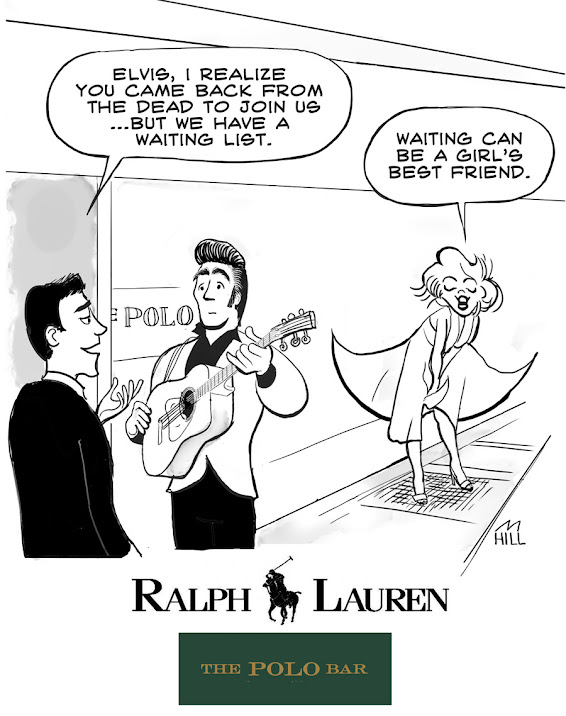 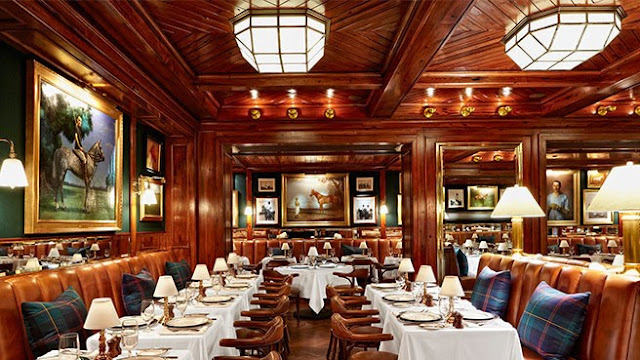 "The Polo Bar" in New York 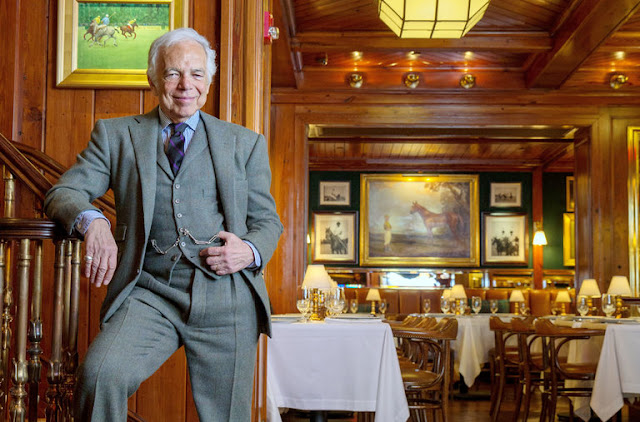 Their advertising director told me that the Polo restaurant in NYC is frequented by celebrities, and their goal was to highlight that fact with humor...i.e., depicting some of these well known humans, and to write funny concepts that fit their personalities. Both were right up my alley. 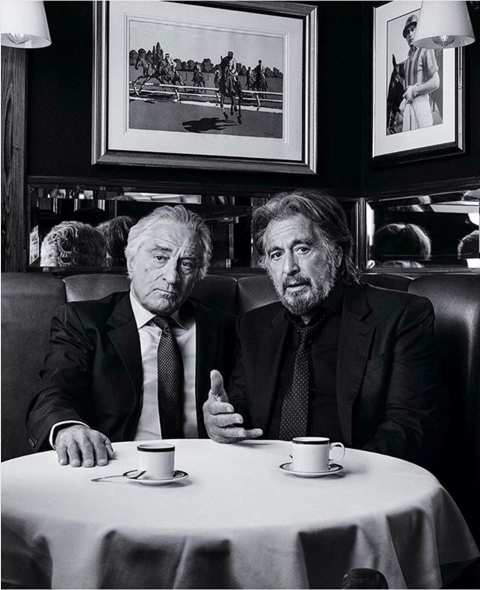 Robert De Niro and Al Pacino, dining in the Polo Bar earlier this week.
(They were in NYC promoting the Martin Scorcese film, "The Irishman".) 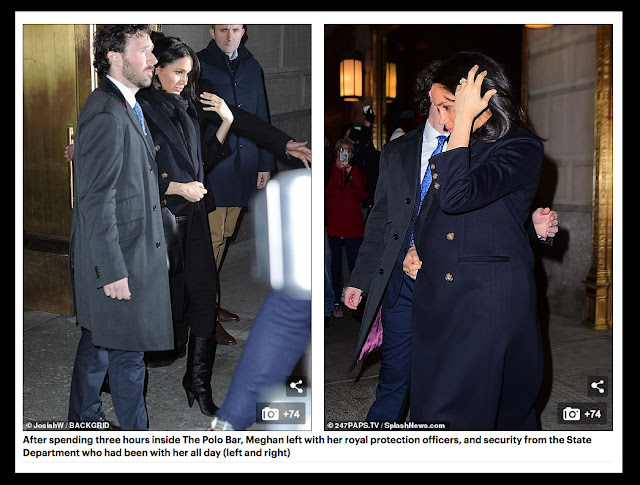 (Photos from an article provided to me by RL for background; covering the Duchess of Sussex/former 'Suits' actress, dining there earlier this year -.)

An added challenge arose: RL's execs felt that I should write and draw concepts only for deceased celebrities. (I get it...and deal with this dynamic often with political and social commentary cartoons. The living are much easier to offend.)
However, that is a significant restriction, especially when trying to create content that will get resonate with today's audiences...more on that later in the post

Another caveat: Ralph Lauren's upper management wanted me to write humor in my own style and  'voice', but wondered if I could draw the celebrity caricatures in the style of the late, great caricaturist, Al Hirschfeld. He is widely considered to be the greatest caricaturist of all time, and his flowing lines were mesmerizing. During his heyday, he was fixture in NYC and was known for drawing celebrities. 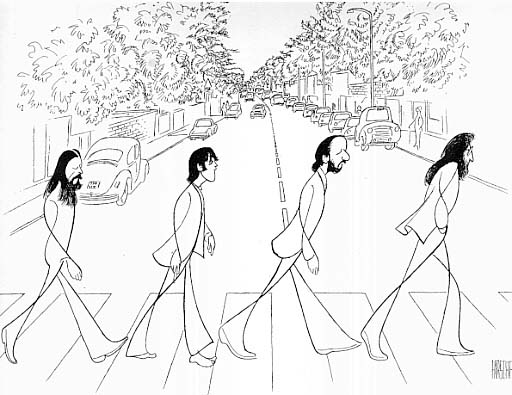 There are challenges in trying to emulate someone else's work, especially that of a legend. For one thing, it is difficult to nail such a well-practiced and distinctive style. Then there's the issue of drawing in another person's style while getting good likenesses of the aforementioned famous. Every caricaturist's method of finding the "right" likeness is different, and I had to combine mine with his. Of course such a challenge can be fun, and this proved to be.


Step 1: I wrote out around ten concepts on a notepad. These were all done with some seed of humor present, but the specifics were very rough.

Step 2: Editing ideas and sharpening humor. Afterward, I selected what I thought had the potential to be the funniest four concepts, fleshed them out a bit, and emailed them to RL corporate folks in New York.

Surprisingly, they liked all four ideas, (that does not usually happen), and they approved starting the artwork on two immediately.

Step 3: I started with a sketched concept featuring Elvis and Marilyn Monroe... 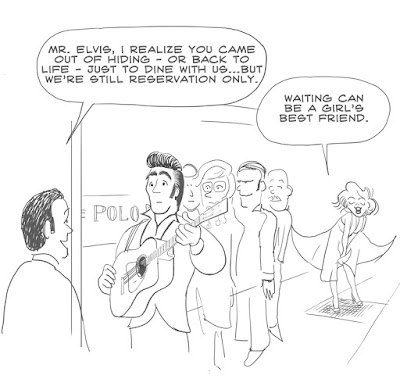 Step 5: The sketch was passed around their management and with a positive response, I went forward with finished artwork in "ink" on my Wacom Cintiq. 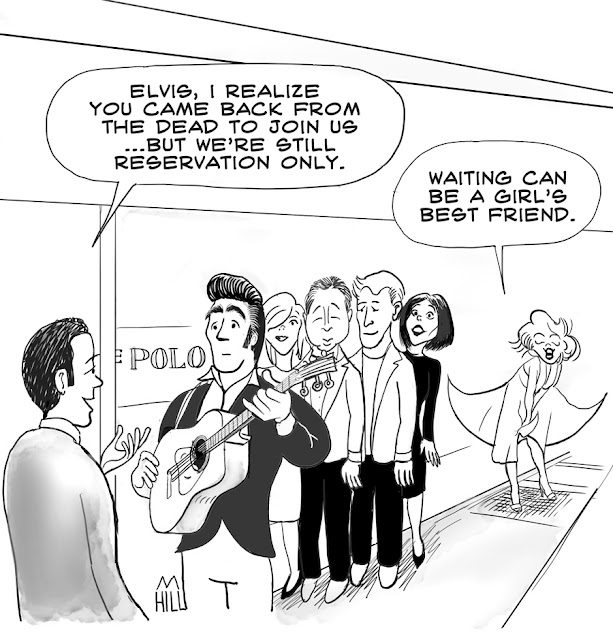 Step 6: I added or "spotted" areas of black ink for contrast and to lead the viewers' eyes to Marilyn. The text was simplified and shading was rendered.

The cartoons are appearing in RL's various social media, for example, their  Instagram. 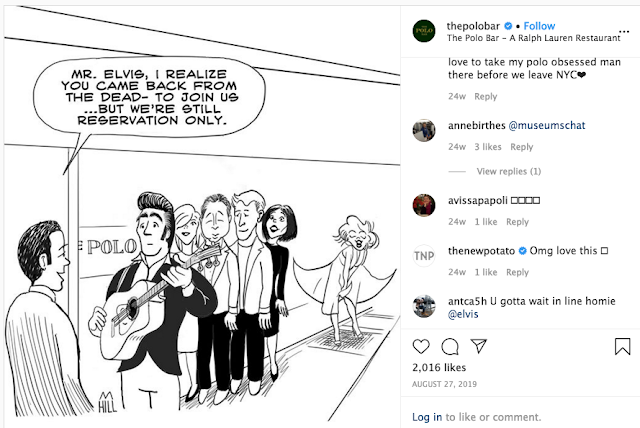 On this second cartoon, an abbreviated glimpse of the process. I went with a Polo theme concept and a young Paul Newman, Clark Gable and Marlon Brando. 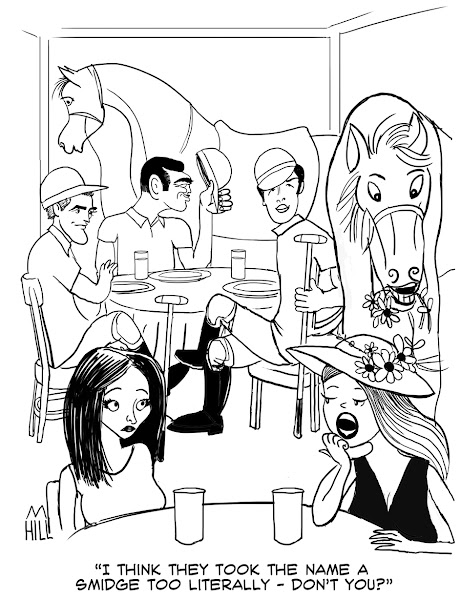 ...But later I decided that it might be fun to have some continuity between cartoons, so I switched Clark Gable for the King. He finally gets a table - as he should. 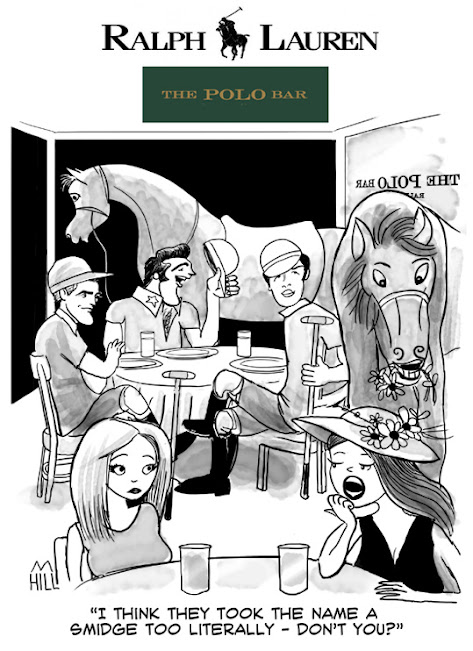 I made other changes: Redrawing the woman in the left foreground, (giving her less contrast, so as to not draw the reader's eye away from the action. The folks at RL also asked me make her a bit more attractive. I added contrast to the area behind the men. Lastly, I added the RL Polo Bar logo to a window on the right.

We have done four cartoons so far, with two of them released. Both have received a positive response in their various ads and social media platforms, and RL's management decided to go forward with more. I have enjoyed the challenge and scope of this project so far, (pleasing the client, the main goal for me) and we'll see how it goes over the next several months.

One thing is nearly certain...I think that I will soon run out of deceased celebrities who are recognizable to today's audiences, and that I will need to talk the RL folks into allowing me to tastefully depict some people with a pulse.